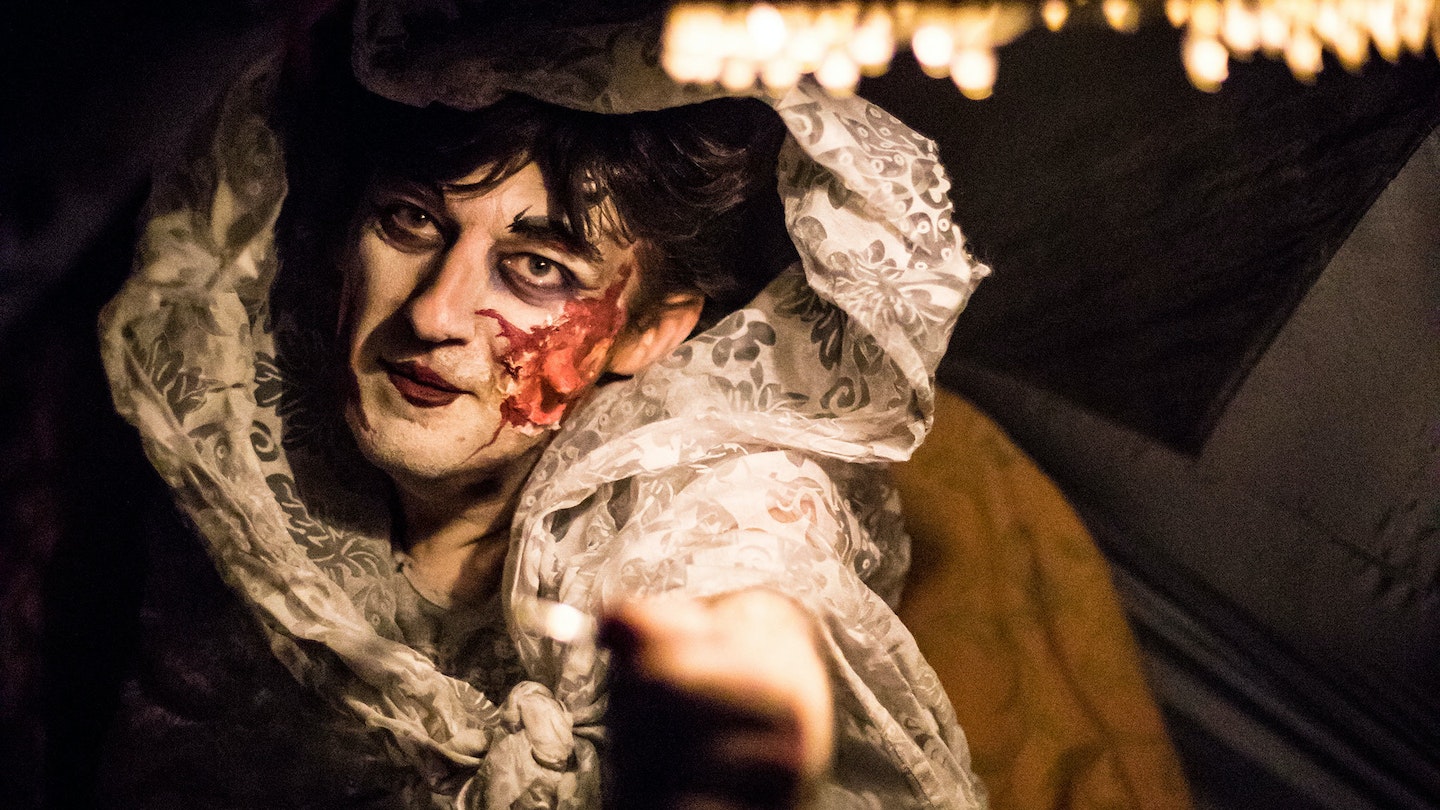 When forced into a cramped deep freezer for what feels like an eternity (in actuality it was a slow-as-molasses seven minutes), you have a choice to make: freak the f*** out or analyze your situation for the lessons it can provide in building amazing human experiences.

We did a bit of both.

As part of Colle McVoy’s program to explore and analyze exceptional experiences, called Experience Geniuses, we endured the chilling 2018 Haunted Basement Utopian Gone Dystopian, an interactive experience focused on absurdist psychological horror. The Minneapolis Haunted Basement began 12 years ago as an art experiment staged in the eerie basement of the Soap Factory, with each room designed by one of the gallery’s emerging artists. Since then, the experience has moved to the basement tunnels of an old General Mills research facility in Northeast and has evolved to become a notorious Halloween fixture, famous for breaking boundaries of fear.

After signing their waivers and spending a long hour in the terrifying haunt, we wanted to learn from the creators. So we met with operations director Walker Friend (that’s his real name) and assistant director Brian Watson-Jones to learn more about their process. We found that while our vocabulary and missions may differ, their approach was eerily similar to our work as brand experience designers.

Create a room that was as much meant to be appreciated as an art exhibit as it was to be experienced as a haunt.


Design With Your Human Victim at the Center

After what amounts to more than 12 years of hands-on (literally, in many cases) ethnographic research, fly-on-the-wall observation and nightly improvisational role playing, the crew at Haunted Basement have come to know their audiences intimately. This research has allowed the creators to identify several unique personas and hone their ability to quickly classify each attendee so as to respond with what they know will scare the hell out of them.

Take, for example, the “Protector” — the stoic, “you can’t scare me” person (usually the boyfriend) — or the “Scaredy Cat,” the person often clutching the Protector’s arm. Once identified, Haunted Basement actors have learned to focus on breaking Protectors, which they know will have the ripple effect of ratcheting up the fear and getting Scaredy Cats to scream for their lives.

During the live performances, the actors have the opportunity to test different scare tactics every 60 seconds with a new group of people coming through their room. Through actor feedback, previewer response and night-vision cameras, the staff is able to measure how well any room is working. Then designs are iterated, actor roles are modified and tactics become refined. And if actors get bored, they can switch rooms the next night and try a different character, which guarantees a unique experience for everyone who comes through.

This constant change is similar to how innovation teams (ours included) work to keep the experiences fresh for everyone. And in an environment where nothing is finished, this approach helps encourage risk-taking with the freedom to fail, learn and refine based on human response.

Creating a room is a collaborative effort involving directors, makeup artists, actors and designers of all sorts: sound, set, lighting, structure, costume and, yes, even smell. The intent is to leverage what they know about human behavior and psychology to produce sensory experiences that exceed expectations to generate fright (versus delight, often the goal in our brand experience design efforts).

Planning begins early in the year, when the director provides a conceptual narrative to act as a jumping-off point. Starting out with whiteboard sketches, a general structure is established. Then design teams work within the established parameters, a process that ensures a cohesive concept while allowing for the self-organized teams to develop unique expressions and find serendipitous solutions. Eventually, ideas for rooms are submitted, considered, consolidated and chosen. From there, teams build what could be considered initial prototypes — haunting experiments for preview audiences who will be observed to learn what works, what doesn’t and how barriers can be broken. The end result is usually not a direct representation of the initial concept because the idea evolves.

This approach —multidisciplinary talent working in cross-functional teams with a shared vision to generate solutions — is the key to creating the vivid, sensory brand experiences today’s consumers expect.

Borrowing from the bar-setting immersive theater phenomenon Sleep No More, Haunted Basement is a dynamic haunt in which no two people will have the same experience. To measure success, the creators avoid obvious business performance metrics, such as year-over-year attendance or nightly revenue, and instead focus on human indicators or what they call “victory conditions.” As an example, vomit is an identified victory condition (and when you have a room that smells like decaying flesh, you might have multiple victories each night!). Repeat visits and “breaking the Protector” are also victories. Another victory condition? When a guest utters the safe word “uncle” to get out.

The goal isn’t to get people to vomit, but we’re proud that part of our stage management is having a vomit plan.


Establishing human-based victory conditions over cold business metrics puts the focus where it matters most — on scaring the bejesus out of people. And with multiple sellout nights every year, this human-centered approach illustrates that business success follows.

Haunted Basement is more than just a great Halloween event. It’s a smelly, claustrophobic and bloody demonstration of how human-centered design can be used to create a genius experience.

Special thanks to the team at the Haunted Basement (from left to right):

All images by Dan Norman

Lessons from Netflix on the Art of Representing a Culture

A 6-point Plan to Hypermotivate Hybrid Teams in 2022