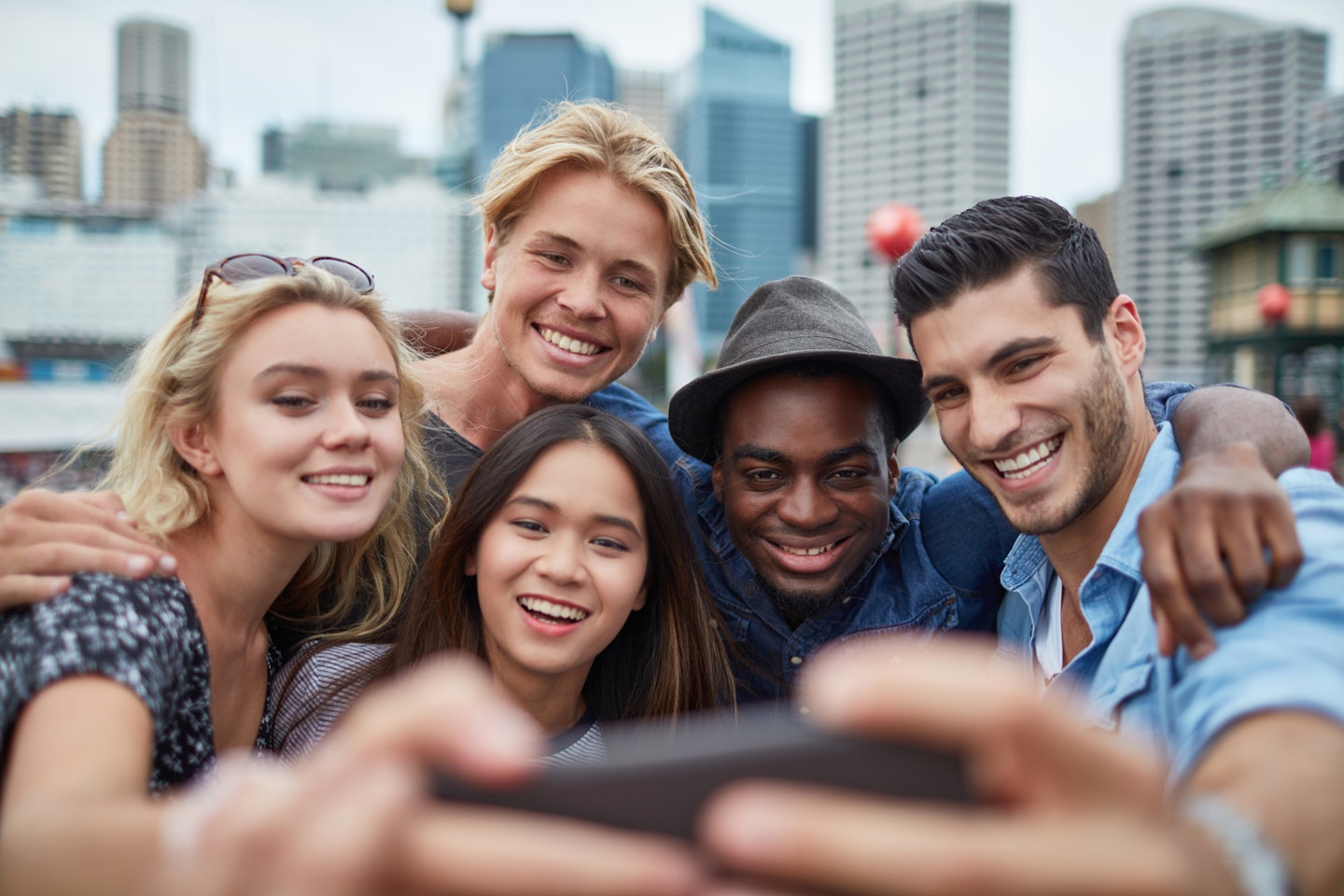 The youngest defined generation, known as Gen Z, is our current obsession in the marketing world. And it should be since the first babies born into it are now already in their early 20s. Their buying power will explode when their spending power surpasses millennials’. Get ready marketers!

Although often considered an offshoot of the millennial generation, Gen Z is a young, dynamic group that is far from reaching its final definition and far from mimicking its millennial counterparts. Overall, Gen Zers are anyone aged 0-22 (born from 1996 to the present). That is more than 90.3 million people in the U.S. with $143.2 billion in buying power (US Census Bureau, 2017). Gen Z is often defined by the fact that they were born before or cannot remember 9/11. They are the first true digital natives and the most diverse generation ever. Most of Gen Z came of age during the Obama presidency, but those in later years will come of age during the—very different—Trump presidency: a post-truth world in which political outsiders carry the fate of the country in their hands.

As this generation continues to mature and as portions of it reach adulthood, we will learn so much more about them and about how marketers can build connections. Today there are truths and tensions that define them and where bridges can be built.

Anxious About the Future, But Empowered to Define Their Tomorrow

Today’s teens are unlikely to remember a time before 9/11 or the financial crisis, and this has shaped their outlook. Over two-thirds of U.S. teens say their number one concern is being prepared for the future, and 43 percent are focused on achieving personal goals (Kantar MillwardBrown, 2017). Gen Z is more driven than older generations and determined to not let the failures of past generations affect their futures. In fact, Gen Z is not waiting for the system to change, they’re going to change it for themselves. Marketers should position products and services as tools for advancement and/or stability for these young consumers.

Today’s teens have inclusivity built into their DNA, which expands beyond race, religion and sexual orientation into gender equality and other issues. Almost half of teens view the ethnic diversity of their generation as a good thing, and nearly 75 percent support equal rights for transgender people (WARC, 2016). To be relevant with today’s young consumers, brands must showcase their inclusivity in authentic and vocal ways. The brands they follow cast aside stereotypes and seek to include rather than exclude.

More than millennials at the same age, Gen Zers are financially savvy. They’re saving, investing and starting to work at a young age. Fifty-seven percent of Gen Z say they’d rather save their money than spend it immediately, while 21 percent say they’ve had a savings account since before age 10 (Center for Generational Kinetics, 2017, EY, 2017). These responsible money habits may come from their parents who are not seen as gatekeepers. Rather, the parents are a sounding board and first stop on decisions big and small. Over two-thirds of parents say their teens are included in large family spending decisions (Iconoculture, 2016).

Gen Zers embrace omnichannel shopping, discovering brands, researching products and making purchases across multiple channels. Four in five teens shop around to find the best deal (WARC, 2016). More than one in four teens use a mobile phone while shopping in a physical store to research products and get input from family or friends (VERVE, 2016). Parents continue to be decision-makers, but marketers who talk directly to Gen Z about the financial implications of their purchases can help build relationships. And brands that make it easy for teens to research and buy their products even when teens are in-store, win. Today, 53 percent of teens say they mostly use their smartphones for online purchases (compared to 30 percent of the 18- to 24-year-olds) (Think with Google, 2017).

While there has been a lot of focus on millennials’ media consumption, Gen Z stands to be the real disruptor. Professional video game competitions, known as esports, are the fastest growing form of entertainment, especially for Gen Z. One-hundred-twenty-seven million people live- streamed the 2018  League of Legends Mid-Season Invitational (vs. the mere 18.9 million viewers who watched the World Series on average) (INvenGlobal, 2018, NYTimes, 2017). And Gen Z prefers YouTube videos over TV content, which means YouTube celebrities are even more popular with teens than mainstream Hollywood celebrities (Business Insider, 2018).

Because their digital lives are mobile-first, Gen Zers expect brands and content to interact accordingly. Brands can no longer consider mobile a mere component of their overall content strategy. Instead, mobility needs to be ingrained in all they do. And even though we know TV isn’t dead, reaching teens with a content-lead approach is a sure way to engage with them.  And if you lay off the reasons to believe and brand-heavy language, you might even get them to share it with their friends.

For Gen Z, health is hip and beauty does not mean perfection. Nearly seven in 10 teens agreed that eating healthy was trendy (Nielsen, 2015). Drug use, alcohol consumption and smoking rates among teens are the lowest they’ve been in decades (Vox, 2016). And when it comes to appearance, Gen Z knows not to trust Photoshopped images. Gen Z likes brands that help or encourage them to live healthy. But be aware, that doesn’t mean striving for perfection, it means striving to be the best version of themselves. And while the classic definition of health — eating well, exercising, and getting good sleep — is important to Gen Z, even more important is their commitment to well-being. That is, a commitment to their mental and emotional health. Gen Z is passionate about a holistic, healthy lifestyle.

Shopping Sustainably or Not At All

Gen Z consumers are keenly aware of corporate social responsibility. And they care about the environment and sustainability because they grew up in a world hyper focused on these issues. Forty-six percent have spent more money on products from sustainable companies. Eighty-nine percent of 14- to 18-year-olds say “reducing consumption will help make the world a better place” (Iconoculture, 2018).

Gen Z expects brands to be sustainable. Nearly a third of Gen Z has boycotted a company they perceived as following unsustainable practices (PR Newswire 2016). Sustainability, whether intentional or not, should be highlighted and shared as much as possible, within reason. Companies should stretch a sustainability mission beyond the business impact (where appropriate) and be transparent about concrete goals. Just remember, Gen Zers are pros at sniffing out authenticity, so if your brand is only doing good for profits, they won’t buy it.

Because of this, marketers need to realize that interactions online do not happen in a vacuum — online presence is offline presence. Gen Z is twice as likely as millennials to stop using a brand’s product or service because of slow responsiveness on social media (WARC, 2017). Adopting a conversational tone digitally as well as integrating digital tools into real-world executions are key. It’s also important to interact with customers on social media in a way that is appropriate for the audience and the brand.

Gen Z is hyperaware of their social activity and its lasting impact: both in the sense of their limitations and the possibilities.

Gen Z is hyperaware of their social activity and its lasting impact: both in the sense of their limitations and the possibilities. While content-sharing sites can offer fame and recognition, they can also be a trap for oversharing and lasting ramifications. Sixty-one percent of Gen Z influencers and 49 percent of Gen Z noninfluencers say they carefully consider what they post (Iconoculture, 2017). Forty-four percent of Gen Z say they really value their digital privacy (Kantar MillwardBrown, 2017).

For this young generation, curation is key. In fact, one-third of Gen Z and 50 percent of those under 12 have a Finsta (a “fake Instagram” that they keep private and use to share the more mundane moments of their life) (Media Village, 2017). Nevertheless, Gen Z loves seeing user-generated content (UGC) and being a part of the conversation; so it’s important to engage Gen Z early and often —while keeping their privacy top of mind. Utilize UGC in a way that reinforces the original intent of the post.

Making Music an Integral Part of Their Lives

Gen Z is obsessed with music: it’s integral to how they define themselves and their world views. Forty-three percent like to have “always on” access to music (compared to 30 percent of millennials). Fifty-six percent say the right music makes them more positive about advertising (compared to 46 percent of millennials) (WARC, 2017). Music should be a consideration in every brand execution, but be aware of lyric meaning in pop cultural. In addition to setting the tone for the brand, it provides an immediate connection for Gen Zers. Carefully consider how music is used in advertisements and branding to make sure it fits with messaging (i.e., doesn’t feel misplaced). Be willing to explore new artists and emerging music trends.

Long misconceived as a mere offshoot of their older millennial siblings, Gen Z is beginning to come into their own. Not only is our youngest generation different from the generation before them, they’re vastly different from one another. And this diverse and multifaceted generation will continue to have increasing influence on spending and broader cultural issues as the years go on.

Gen Z is the new “it” generation and it’s never too soon for brands to start working toward solutions for this burgeoning group of consumers.

When Brands Dream of Electric Sheep.

In A World Gone Tech, People and Creativity Still Matter